Sitting in the back seat? You could be at more risk of dying or suffering serious injury in a head-on collision than someone sitting in the front.

That counterintuitive finding comes from a study released Thursday by the Insurance Institute for Highway Safety, which found that rear passengers often lack sufficient protections in frontal crashes.

In some crashes, poorly engineered seat belts are killing or badly injuring back-seat passengers while front-seat passengers in the same vehicle survive or avoid serious injury.

IIHS is using the findings to design a crash test that will assess the safety of rear-seat passengers in new vehicles.

“Automakers have done a great job at improving restraint systems for drivers and front seat passengers,” IIHS President David Harkey told USA TODAY. “Less attention has been paid to the back seat and the safety of those passengers.” 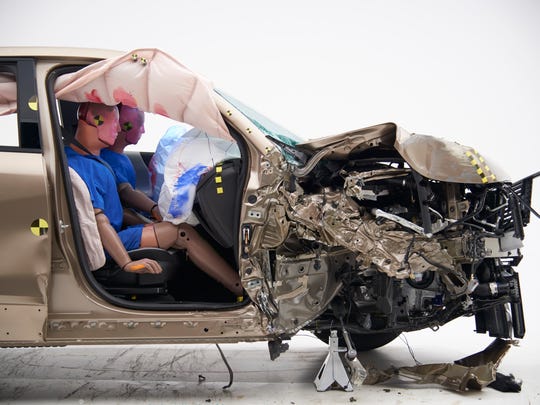 One reason is that rear seatbelts are not made with the same care as front seatbelts.

Seat belt pre-tensioners, which tighten the belt immediately before the collision but allow enough space to mitigate injury, are insufficient in the back seat, IIHS found.

The study assessed the impact of 117 deadly real-world crashes on older children and adults who were wearing seatbelts. Experts continue to recommend that young children be strapped into car seats in the back and not seated in the front, where powerful airbags pose the threat of injury.

In some cases, back-seat passengers are suffering chest injuries from belts that are too tight, while in others their heads are smashing into the seat.

Harkey said the results suggest that it’s time for automakers to consider front airbags in the back seat. No vehicle currently has them, he said.

IIHS also said that automakers could consider inflatable seat belts, such as ones introduced by Ford and Mercedes-Benz.

“There’s the potential that we’re going to have a lot more people riding in rear seats as we move forward and therefore greater risk of injury to rear seat passengers,” Harkey said.