WASHINGTON – President Trump took to Fox News this morning to rail against what he saw as “the worst immigration laws ever” and “loopholes” in the nation’s immigration system.

According to Trump, the border is “like Disneyland” now that the administration’s family separation policy had ended — a controversial policy he saw as a deterrent against family migration. “Literally you have ten times more families coming up because they won’t be separated from their children,” said Trump. “It’s a disaster.”

Trump had called in for an interview with Fox’s Maria Bartiromo on “Sunday Morning Futures.” Reporting on the El Paso side of the U.S.-Mexico border, Bartiromo cut away midway through the interview to show an immigrant family being detained by the Border Patrol, directly typing Trump’s comments on immigration to the scenes of immigrant detention. Bartiromo claimed, without evidence, that the group being detained might not be a real family. 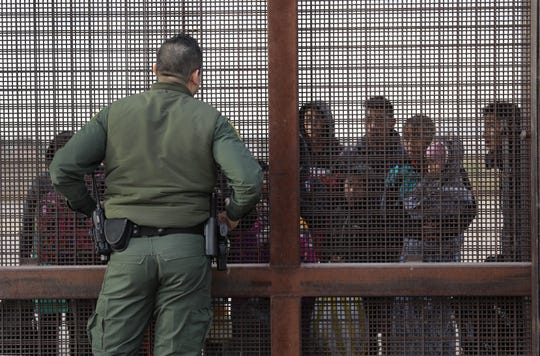 Later in the interview, when asked if an immigration reform package would be debated or passed in 2019, the president did not give a specific timeframe but alluded to a merit-based immigration package.

“We’re going for a much bigger package. We’re making a plan and talking about immigration laws on a much larger scale,” he explained. “We need workers, we’re doing a plan based on merit.”

The president also criticized the immigration court system, which faces a large backlog of cases.

President Donald Trump says he “didn’t like the sight or the feeling of families being separated.”
USA TODAY

Trump did not give any specific policy proposals, though, that would address the issues he raised during the interview, despite speculation that the administration would attempt to take a harder line on limiting migration.

The administration had threatened to close the U.S.-Mexico border, but backed off on the threat at the beginning of April after an outcry from congressional and business leaders. President Trump had removed officials at the Department of Homeland Security who he saw as insufficiently tough on border security, including Department of Homeland Security Secretary Kirstjen Nielsen.

3 things to know: The “crisis” at the border and in Trump’s Homeland Security Department

The administration’s attempt to return asylum seekers to Mexico while their cases were adjudicated, also known as the “Remain in Mexico’ program, was blocked by a federal judge on April 9.