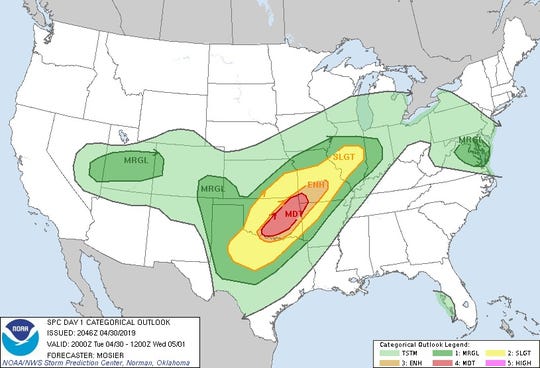 Severe storms and tornadoes roared across the South on Tuesday while heavy rain led to flash flooding in the Midwest.

As of late Tuesday, there had been at least seven reports of tornadoes, with damage reported in Agra, Oklahoma, the Storm Prediction Center said. No deaths or injuries had been immediately reported.

Heavy rain in Davenport, Iowa, led a breech of a levee, flooding part of the downtown area, according to WQAD-TV.

The National Weather Service had issued flood warnings for areas directly on either side of the river in 10 states, from Minnesota and Wisconsin south to Louisiana and Mississippi.

“It’s pretty much the entire river, all the way to the Gulf of Mexico,” Mike McClure, a meteorologist with the National Weather Service in Davenport, Iowa, said Tuesday.

Tornado watches stretched from northeastern Texas to southern Missouri, with 13 million people in the potential path of the dangerous storms.

“Severe thunderstorms are forecast to develop from north-central Texas into central Illinois into tonight,” the National Weather Service said. “These storms will have the potential to bring locally damaging winds, very large hail and tornadoes.”

Eastern portions of Oklahoma were most at risk from the severe weather, the Storm Prediction Center warned.

Heavy rain and flash flooding were also possible from Texas to Michigan.

Meanwhile, in the Rockies, snow was reported on the final day of April in Colorado, Wyoming, South Dakota and Montana.

WATCH: WQAD News 8 is on the scenehttps://t.co/iIQQNAeaET